She said: “I wonder if part of the reason why many of us do not know we ought be afraid of our partner's escalating anger, is because we have shut down our emotions little by little until we don't even notice the water's hot. I ought have realized he was getting out of control prior to him leaving, but I didn't. Part of my cluelessness was based on years of decreasing my own sensitivity in order to survive the relationship.”
And then she replied: "I think we have all referred to the 'Boiling Frog Syndrome' many times so I wanted to post it so that those that have not heard of it or are new to seeing their N relationship through the eyes of abuse could perhaps look at their own experience and see it again.  From the perspective of peeking over the rim of that hot pot!

"Often we ask ourselves, how in the world did I get here?  How did things get so bad?  How did I not notice or react sooner?  This story is helpful when I ask myself these questions because I realize that it happened so gradually, over such a long period of time---I simply did not react to the changes.  That frog started off happily in the pot, loving life.  He did not know about the burner underneath, he did not know that the heat was being turned up higher and higher, the changes were not felt and were gradual.  When the frog realized his situation, it was very difficult to react or respond. It is a great analogy for my experience with abuse. " ~Blind 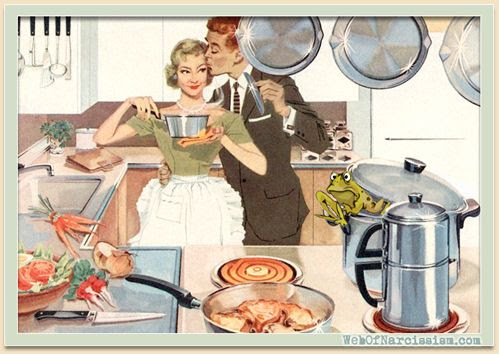 Parable of the Boiling Frog
Article Link
Here's an interesting story that has been told several thousands of times and is still intriguing. It's based on a scientific experiment and is therefore repeatable.
First. A frog is put into a pot of water. The water happens to be boiling. The frog jumps out of the water immediately. If the water level is low, the frog still jumps as vehemently as he possibly could and gets out of the pot.
Second. The same frog is put into a pot of water. This time the water is pleasant. The frog is lying happily and enjoying his time. The water in the pot is slowly heated. At points, the frog does get upset but doesn't do much. The temperature keeps rising. There comes a time when the water is boiling, and it's too late for the frog to jump out since he can almost not do anything in water as hot as that. The frog is boiled. Alive.
Now, what really does that tell us? It has one of the most profound lesson related to change. That change is not noticed when it occurs over a relatively long timeframe, although the same change is taken notice of if the timeframe is shorter, is one of the most familiar mockery of life. And this story describes it in the most effective manner. We are all frogs, waiting to be boiled in water of some kind of the other - be it health, relationships, technical competency, or plain simple habits.
Think about one significant change in your life. Something that has changed your life profoundly. Now, try to recall a point when that change started, how long did it last, and when it was concluded. Most people would answer that the change did not start intentionally - or even if it did, they cannot point out the first moment "after the change". Most significant changes happen over a long or relatively long period of time. And finally, there are seldom examples of being able to point out a specific moment in lift when the change was concluded. To summarize this, the change is constant.
Now, what's new here? We have been hearing/reading/and even writing this "change is constant" thing all of our life! The point here is not to prove that the change is constant, it is rather to prove that the change is not noticed constantly.
Let's see some examples.
Try to think of someone around you - or yourself if applicable - who from being a normal, healthy person gradually transformed into being overweight. When did this start? When was it noticed? Did all that transformation happen in a day or a week or even a month? Why was it not noticed all that while?
Try to think of a neighborhood that changed its identity - for better or worse. When did it start? You could recall now perhaps. But did you notice it at that time?
Try to think of an organization doing well and later going bankrupt. When did the descent start? How long did it take to sink?
And there are several more. The point is not when a particular change starts. The point is when the change is gradual it is often ignored or goes unnoticed. The change then accelerates and gets traction. Soon many more things around start changing. The rate at which things change is exponential, i.e. all the changes taken place so far provides further support and push to the new changes. Very soon complete transformation is noticed. Yes, noticed. That is when it is noticed. It is too sad that everything is beyond repair at this point.
The key to avoid it is to keep a constant watch on everything that is changing. Driving habits, eating habits, sleeping patterns, relationships and friendships, coding habits. Everything. One useful thing that could be done is listening to an external observer, like a close friend. The friend knows you, and can see the change externally and therefore notices it. It may seem paradoxical to read at first since just in the previous paragraph, I said change is hard to notice when they are gradual. However, when seen externally, change is noticed earlier than internally.